A visit to Roxas City won’t be complete without taking a glimpse on its historic district which is situated right in the heart of the city. The historic district is actually covered quite a small area and it’s another reason why it is a must to visit it because it’s convenience and it offers a great insight about Roxas City history. There are several places that covered Roxas city’s historic district and visiting these places can be done a tour that we usually call Heritage Walk.

Among the places that people could visit when doing Roxas City’s Heritage Walk includes Immaculate Conception Cathedral, Fountain and Capiz Provincial Capitol, Roxas City’s iconic bridge, Birthplace of President Roxas, Panubli-on Museum, and the statue of President Manuel A. Roxas. We will give short descriptions of these places below and it is very easy to visit these sites because it’s just walking distance from each other.

A few minutes’ walks from the ancestral house, we’ll reach another point of the heritage walk tour which is the statue of President Manuel A. Roxas which stands so proud and honorable, waving his hand as if welcome everyone to be his guest in his city.

Then we have the Panubli-on Museum, just a walking distance from the statue is our next stop. The museum is original a water chamber which was constructed over 100 years ago under the order of the Pastor Alcaraz, the town mayor of Capiz that time. It was then converted into a gallery in the 90s under the order of Congressman Gerardo A. Roxas Jr.

Next spot in our list is Immaculate Concepcion Metropolitan Cathedral which dates back in 1698 – which is considered as one of the oldest church in Panay Island. Though, the church had been destroyed by a strong typhoon but was later on rebuilt in 1728. It is the center of Roman Catholic fate in Roxas City and celebrates one of the major festivals of Capiz which is the Sinadya sa Halaran every December.

The Capiz Provincial Capitol is one the most prominent architectural building in Roxas City and you’ll reach it with few more walks from Immaculate Concepcion Cathedral. The Capitol was built upon the order of Sulpicio Jugo Vidal, Capiz first provincial governor in 1901. 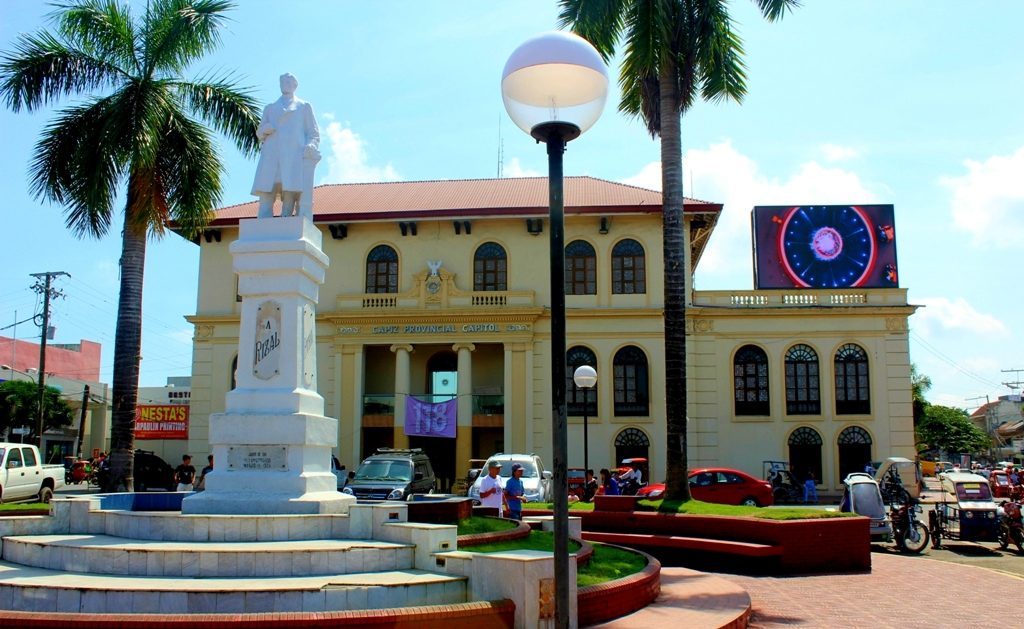 Just right in front of the Capiz Provincial Capitol, we have the monument of Dr. Jose Rizal. It is one of the oldest monuments dedicated to the Philippine National Hero and was built upon the order of Governor Jose Cortez Altavaz in 1911. It is also a timeless reminder for the Capiznons for the importance of justice, homeland and freedom which were inscribed in Spanish on its pillar.

In the front of Capiz Provincial Capitol and the Immaculate Concepcion Cathedral sits the Roxas City Fountain. It stood the test of time although it underwent several renovations. Its glorious side can be witnessed at night time where colorful lights are dancing on it magically.

The Roxas City Bridge also known as the Old Capiz Bridge is one of the oldest infrastructures in Capiz which was built in 1910. It witnessed the changes and development that the Province of Capiz and the City of Roxas experienced and it commands a great view of the dazzling Panay River. A picturesque view of the sunset can be seen beautifully from the bridge too.

We have seen the bridge thus, next is the beautiful Panay River flowing to the sea gracefully and nonchalantly.

Last stop is the Roxas City Bandstand which is situated just beside the Panay River and in the front of Roxas City Hall. It was originally built as a gazebo and had witnessed major events and social gathering in the history of Roxas City. Historically, it is a place for the people’s voices to be heard, an important venue for Roxas City’s political, social and community affair.

Note: For assistance or further information about the Heritage Walk tour, please coordinate with Capiz Provincial Tourism and Cultural Affairs Office. You can contact them at +63 (036) 621-0042 loc. 133, or via email at capiz.tourism@gmail.com (via budgetbiyahera.com).

This site uses Akismet to reduce spam. Learn how your comment data is processed.

This website uses cookies to improve your experience while you navigate through the website. Out of these, the cookies that are categorized as necessary are stored on your browser as they are essential for the working of basic functionalities of the website. We also use third-party cookies that help us analyze and understand how you use this website. These cookies will be stored in your browser only with your consent. You also have the option to opt-out of these cookies. But opting out of some of these cookies may affect your browsing experience.
Necessary Always Enabled
Necessary cookies are absolutely essential for the website to function properly. This category only includes cookies that ensures basic functionalities and security features of the website. These cookies do not store any personal information.
Non-necessary
Any cookies that may not be particularly necessary for the website to function and is used specifically to collect user personal data via analytics, ads, other embedded contents are termed as non-necessary cookies. It is mandatory to procure user consent prior to running these cookies on your website.
SAVE & ACCEPT